With a sense of vision and a ruthless pragmatism, Lee Kuan Yew led Singapore as it transformed from a tiny island with no natural resources into a thriving economic success.
He successfully channelled the energies of Singaporeans to create what has often been described as an economic miracle, a mixture of private and state capitalism.
Mr Lee made Singapore prosperous, modern, efficient and practically corruption-free - and overseas investors flocked in.
Continue reading the main story

We decide what is right. Never mind what the people think”

Lee Kuan Yew
But while he was admired for his economic success, many expressed concern over his record on human rights.
Lee Kuan Yew was born on 16 September 1923 in Singapore, the son of third-generation Chinese immigrants.
His upbringing had a strong British influence and his grandfather dubbed him Harry Lee, a name by which he was known through most of his early life.
Mr Lee went to an English school in Singapore but his further education was disrupted by the Japanese occupation, which began in 1942. 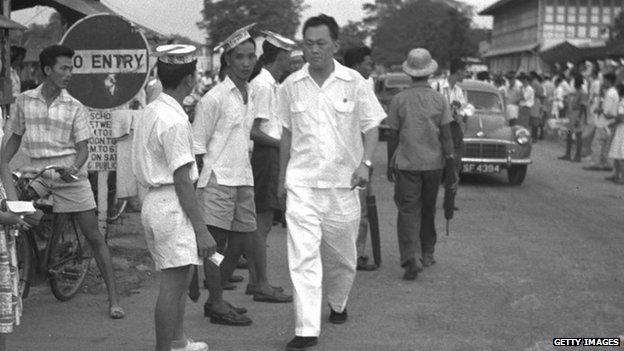 Lee on the campaign trail in 1958
For the next three years, he was involved in the black market and also used his command of English to work for the Japanese propaganda department.


After the war he went briefly to the London School of Economics before going up to Cambridge, where he took a double first in law.
During his time in England, Mr Lee became a devotee of the BBC Home Service, forerunner to Radio 4, and took time out to campaign for a university friend who was contesting a parliamentary seat in rural Devon.
Mr Lee, a committed socialist from his student days, returned to Singapore where he became a prominent trade union lawyer.
Continue reading the main story

In 1954, he was a founder and the first general secretary of the People's Action Party (PAP), a post he was to hold for most of the next 40 years
The PAP won the majority of seats in the 1959 elections and Singapore passed from overall British control and became a self-governing state.
Mr Lee took Singapore into a merger with Malaysia in 1963 but it was short-lived. Ideological tensions and a series of violent clashes between ethnic groups led to Singapore's expulsion from the federation to become fully independent. 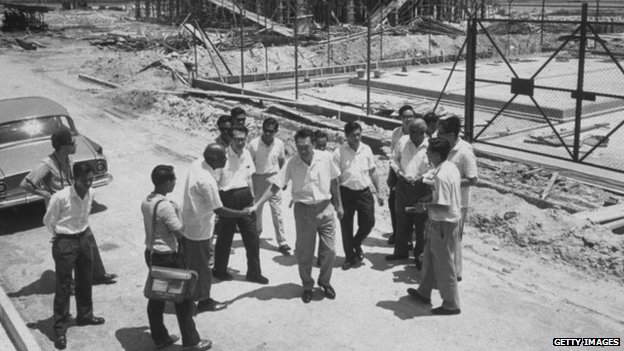 Lee initiated a huge development programme
It was a difficult move for Lee, who saw the alliance with Malaysia as a way of finally throwing off the area's colonial past. He described it as "a moment of anguish".
Commercial and military links with Malaysia were maintained, however, and Britain was encouraged to keep its base in Singapore for the joint defence of the island and Malaysia.
Mr Lee set about a huge programme of reform, designed to transform Singapore from the "cesspool of squalor and degradation" described in one contemporary account to a modern industrialised state.
Corporal punishment

To do this he maintained tight political control over every aspect of the city state, making it one of the world's most regulated societies.
Mr Lee detained some of his critics without trial, restricted the media and foreign publications, and arrested a number of journalists.
"Freedom of the press, freedom of the news media, must be subordinated to the overriding needs of the integrity of Singapore," he said. 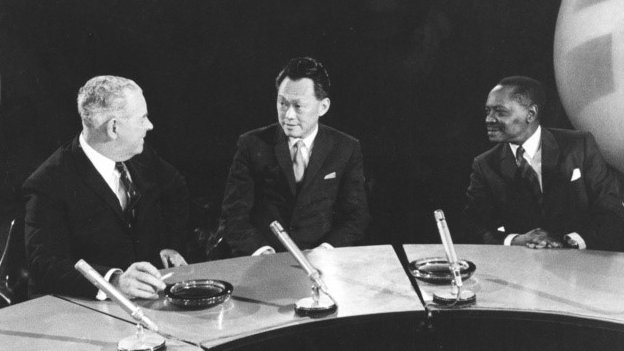 An appearance on the BBC's Panorama programme in 1969
He justified his actions by claiming that the newspapers were being financed by hostile interests abroad.
Mr Lee contended that in a developing nation some freedoms had to be sacrificed. The alternative to anti-communism was communism, and the West's concept of liberal democracy could not apply.
However, some of his critics argued that holding all the parliamentary seats should have provided him with enough security to avoid having to use such repressive measures.
As a committed anti-communist, he was accused of adopting a communist-style regime to further his policies although, unlike many communist regimes, the people of Singapore benefited financially from his rule.
From 1960 to 1980, Singapore's GNP per capita increased 15-fold.
Continue reading the main story

Israel provided the model, surrounded as it was by hostile Arab states. "Like Israel, we had to leapfrog the rest of the region, and attract multinational companies," Lee said.
He understood the importance of building a good relationship with China, something that was helped by his friendship with the Chinese leader Deng Xiaoping.
Deng, who visited Singapore in 1978, expressed admiration for Lee's economic policies; Mr Lee was impressed with the reforms that Deng instituted in China.
Mr Lee introduced measures that stamped out the corruption that had been endemic in the former colony and embarked on a programme of low-cost housing and industrialisation to provide employment.
He also worked to pull together the island's diverse ethnic groups to create a unique Singaporean identity, based on multiculturalism. 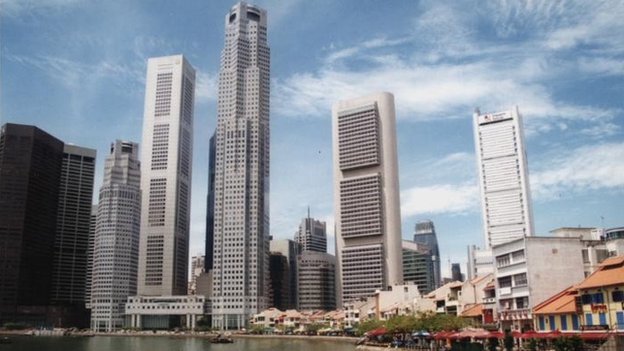 Lee built Singapore into an ultra-modern city
He was a great believer in the efficacy of corporal punishment, having been on the receiving end himself while at school.
"I bent over a chair and was given three of the best with my trousers on," he later recalled. "I have never understood why Western educationalists are so much against corporal punishment. It did my fellow students and me no harm."
By the time he left office, corporal punishment was an intrinsic part of Singapore's judicial system being prescribed for more than 40 offences.
Mr Lee also took steps to control Singapore's fast-growing population, introducing a family planning campaign and, through the tax regime, penalising those who had more than two children.
Continue reading the main story

Later he tried to encourage more graduate women to marry by exempting them from the child control policies that still applied to their less well educated sisters.
Singaporeans were taught how to be courteous, how to be less noisy, when to flush the lavatory, and not to use chewing gum. There was no graffiti because the government said there should be none.
"We were called a nanny state," Mr Lee once told the BBC. "But the result is that we are today better behaved and we live in a more agreeable place than 30 years ago." 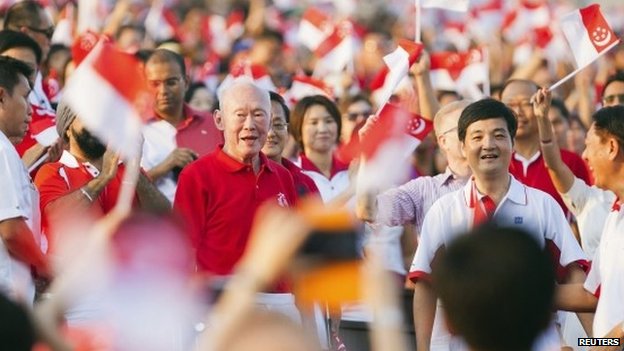 As the elder statesman, Lee Kuan Yew remained a popular figure
However, despite higher living standards and increasing affluence, younger voters were rejecting him in significant numbers and siding more with the opposition.
In January 1985, he refreshed his cabinet with young technocrats, and despite the economy going through a rough patch his party continued to win landslide victories at the polls.
When Mr Lee stepped down in 1990, after winning no fewer than seven elections, he was the longest-serving prime minister in the world.
He remained active in politics, taking a leading part in the campaign to persuade more Singaporeans to speak Mandarin Chinese as well as English.
During his time in office Singapore moved from being a developing nation to one of the foremost industrial powers in Asia.
There are those who believe that development was bought at the price of personal freedom and often cite Lee's penchant for suing media organisations who disagreed with him.
But Mr Lee stood by his record until the end. "I did some sharp and hard things to get things right. Maybe some people disapproved of it… but a lot was at stake and I wanted the place to succeed, that's all," he said in a 2011 collection of interviews.
"At the end of the day, what have I got? A successful Singapore. What have I given up? My life."